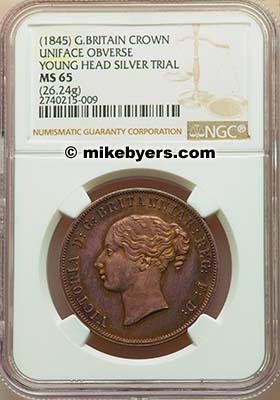 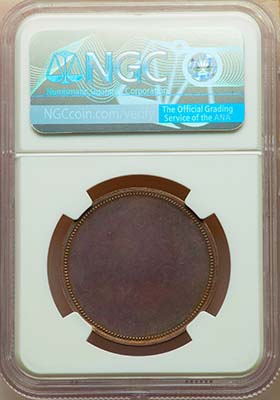 NGC recently authenticated and certified this unique Great Britain Silver Crown Die Trial Piedfort Pattern. It was struck in 1845 with the "Young Head" portrait that was first used in 1839 when the Royal Mint in London struck proof Crowns.

Leonard Wyon designed the Queen Victoria "Young Head" portrait for the obverse. The reverse of the regular issue was designed by Merlin, who retired in 1844. Wyon replaced Merlin upon his retirement and became the chief engraver for the Royal Mint in London.

After extensive research by NGC, it was determined that this unlisted, unique and unrecorded silver die trial was struck in 1845. It is not listed in any numismatic reference book including Linecar & Stone, ESC or Krause. This 1845 Victoria Silver Die Trial was among many unique and spectacular die trials, patterns and off-metals that were in a collection that was recently sold by a major Asian auction company. A different unique Victoria silver die trial of the "Gothic" design also sold. It was 33mm (the same as this 1845 Crown die trial), but was 22.24 grams in weight and was Sterling Silver .9614 fine. It was also certified by NGC and recently sold in a Heritage auction.

There were also amazing and unique trial strikes and off-metal Great Britain 1839 5 Pound "Una And The Lion" gold coins auctioned off as well in this collection. Only the Royal Mint Museum in London, England has a more extensive collection of pattern "Una And The Lion" 5 Pounds. The museum has 13 pieces: 2 in gold, 4 in silver, 2 in bronzed copper and the remaining are die trial impressions from the unfinished dies. This auction also featured unique Lauer patterns designed and struck in 1887 for Queen Victoria's Jubilee. These 5 Pound 1839 "Una And The Lion" patterns as well as the Lauer 1887 patterns and die trials were also from the 1904 Murdoch Collection.

This new discovery is enigmatic due to several fascinating features. It was struck in Sterling Silver .9774 not .925, has a diameter of 33mm not 38.61mm, weighs 26.24 grams not 28.27 grams, is a piedfort (twice as thick) not the standard thickness, and is uniface (only struck with the obverse die).

Since it is a unique and enigmatic coin, there is an alternative theory pertaining to the origin, production and history of this coin. L. C. Lauer, the famous German coin engraver who designed well known and unique silver crown patterns and gold patterns for the Queen's Jubilee in 1887, didn't conform to the standards of the British specifications of diameter, weight, purity and thickness.

He produced English patterns for Adolph Weyl in the 1860's and 1880's to be presented to the Royal Mint in London. His lack of conformity gave confusion to the intended denomination of the pattern and might explain why the weight, thickness, diameter and fineness is different than that of the adopted Silver Crown specifications, if this Silver Crown Die Trial Piedfort was not struck in 1845.

In 1860, Adolph Weyl presented patterns for British and Colonial use, including the English Penny, which was switched from copper to bronze, that were struck by L. C. Lauer. The diameter of an English Penny was 30.86mm, which is close to the diameter of this Crown, which is 33mm.

To add to the mystery and intrigue, in 1887, L. C. Lauer produced patterns for Queen Victoria's Jubilee. One of his was an 1887 Gold Pattern Crown which realized $235,000 in a recent Heritage auction. It has the same punch with the same "Young Head" portrait that this Silver Crown Die Trial has (ESC 342A). The Gold Crown was struck for Spink & Sons of London. Unfortunately there are no surviving records at Spink's, as the records were destroyed in a fire during World War II. The Gold Crown has a plain edge, is 40.5mm in diameter, is one of two known and is pedigreed to the Murdoch Collection of 1904. Click here for more information and photos of this 1887 Gold Pattern Crown that sold for $235,000.

Also in 1887, Lauer struck a unique and enigmatic gold pattern also pedigreed to the Murdoch Collection. It is a Great Britain Queen Victoria Obverse Die Trial. It weighs 10.16 grams, has a diameter of 27.2mm and was authenticated and certified PR 63 CAMEO by NGC.

It was struck for the Jubilee of Queen Victoria with a new portrait, which was proposed for new coinage. Once again, Lauer did not conform to British standards. There is speculation that this gold pattern was intended for a Florin, Half Crown or Penny, each with a diameter of 29.5mm or more. Some experts believe it is a pattern for the gold 2 Pound design since the diameter is 28.4mm, which is closest to this gold pattern of 27.2mm. Click here for more information and photos of this unique Lauer pattern.

In the reference book used by PCGS and NGC, English Pattern Trial and Proof Coins in Gold by Alex Wilson and Mark Rasmussen, Lauer's gold patterns for 1887 are photographed, attributed and assigned W&R numbers. This includes W&R #378 on page 433, which is an undated obverse pattern (1887) for an unspecified denomination, also by Lauer, with a very similar portrait of Queen Victoria. Also listed and plated in W&R is #371 on page 426, a gold Crown pattern of 1887 that was designed by Lauer for the jubilee of Queen Victoria. There are six known and one just sold in a Heritage Auction for $156,000. W&R lists several other gold patterns designed and struck by Lauer for the reverse design and some with both the obverse and reverse design including (3) 6 Pence patterns, (3) Penny patterns, (2) 1/2 Penny patterns and (2) Farthing patterns. W&R #394 on page 450 documents a uniface obverse pattern for an 1887 Penny, also by Lauer and is 31mm. There are other Lauer gold patterns for the 31mm Penny that are uniface as well (BMC-2137, BMC-2172).

Even considering Lauer's history of producing patterns that did not conform to the specifications of circulating English coinage, NGC determined that this Silver "Young Head" Victoria Crown Pattern was struck in 1845, as a trial strike for the portrait of Queen Victoria. There are other Silver Crown Patterns during this time period. Most are listed in ESC but this unique unlisted Silver Die Trial Piedfort stands alone as part of the history of Great Britain's coinage during the reign of Queen Victoria from 1837 to 1901. None have the history, fascination, enigmatic features, uniqueness and excitement of being a new discovery, unrecorded and unknown to the numismatic community. 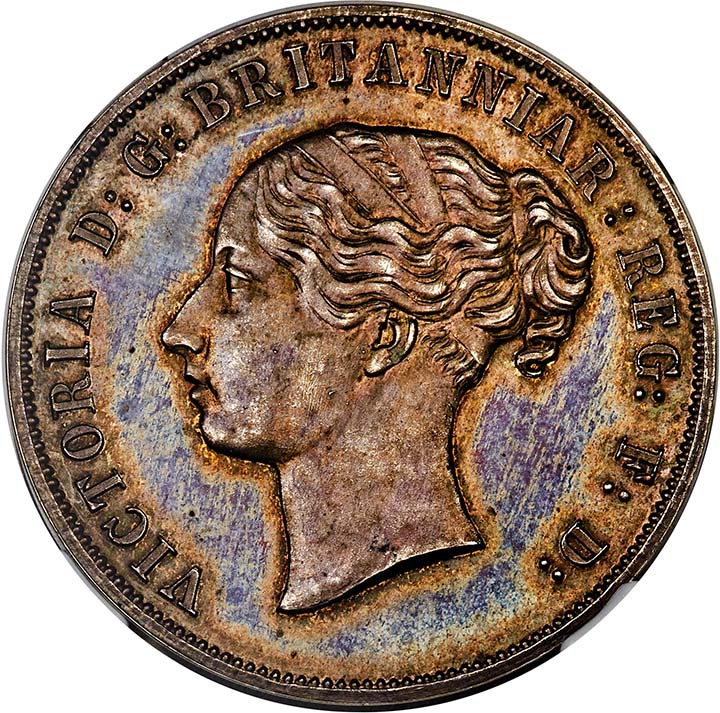 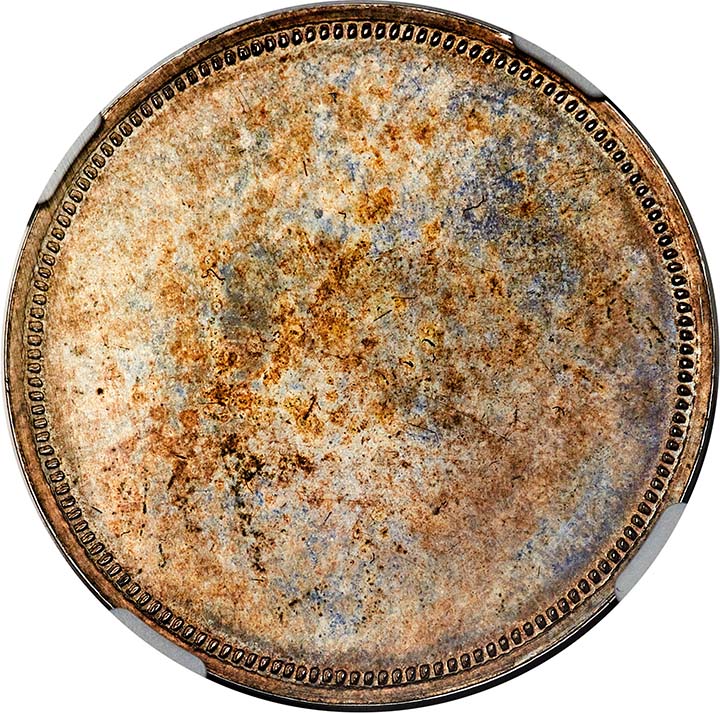 This Piedfort Pattern has twice the thickness of a normal coin: 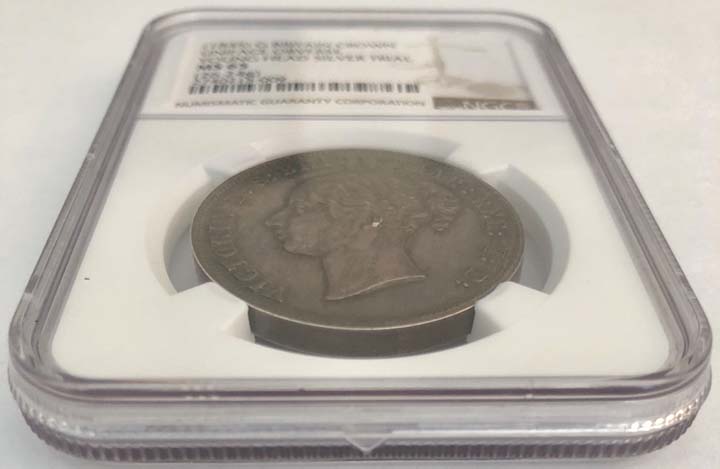