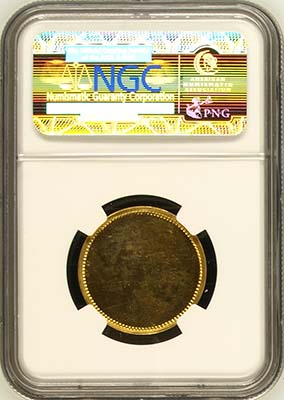 Several patterns struck in gold with new designs were submitted in 1887 for the jubilee of Queen Victoria. Her young head portrait had been used for 50 years since her coronation in 1837. This unique gold pattern portrays a new portrait of Queen Victoria on the obverse. It is technically an obverse die trial and is uniface since there is no design or denomination on the reverse. This unique Great Britain gold pattern was designed by L. C. Lauer, who was a famous German engraver who designed well known gold patterns in 1887 for the Queen's Jubilee. Lauer had Adolph Weyl present it in 1887 to the Royal Mint as a proposed pattern for the design change. This Proof 63 Lauer gold pattern obverse die trial is unique since it is only of Queen Victoria's portrait.

In the reference book used by PCGS and NGC, English Pattern Trial and Proof Coins in Gold by Alex Wilson and Mark Rasmussen, Lauer's gold patterns for 1887 are photographed, attributed and assigned W&R numbers. This includes W&R #378 on page 433, which is an undated obverse pattern (1887) for an unspecified denomination, also by Lauer, with a very similar portrait of Queen Victoria. Also listed and plated in W&R is #371 on page 426, a gold Crown pattern of 1887 that was designed by Lauer for the jubilee of Queen Victoria. There are six known and one just sold in a Heritage Auction for $156,000. W&R lists several other gold patterns designed and struck by Lauer for the reverse design and some with both the obverse and reverse design including (3) 6 Pence patterns, (3) Penny patterns, (2) 1/2 Penny patterns and (2) Farthing patterns. W&R #394 on page 450 documents a uniface obverse pattern for an 1887 Penny, also by Lauer and is 31mm. There are other Lauer gold patterns for the 31mm Penny that are uniface as well (BMC-2137, BMC-2172).

Since this design is almost identical to the 1887 gold Crown designed by Lauer for Spink & Son, which realized $156,000 in the Heritage auction, it is believed that this veiled head portrait of Queen Victoria was also commissioned by Spink & Son in 1887. There are no surviving records or documents since there was a fire during World War II that destroyed the Spink & Son records in London.

Although the diameter of this unique gold pattern is closest to the gold 2 Pound, Lauer did not conform to the British weight standards when producing the planchets to strike his gold and silver patterns. W&R #378 is a pattern in gold by Lauer but weighs 7.64 grams, not the standard 7.32 grams for a Sovereign. Several of his silver Crown patterns for Queen Victoria listed in ESC did not conform to the sterling silver ratio as well. So it is documented that the diameter, weight and purity differ from pattern to pattern.

This piece was rediscovered in 2008 after the publication of the W&R volume of British gold patterns and proofs, which was published in 2000. It recently appeared and was sold in a Japanese auction of world-class British gold coins, gold patterns and silver patterns. This auction featured several unique British Lauer patterns designed and struck for the 1887 Victoria Jubilee. Also featured were 5 Pound 1839 Una and the Lion off-metal patterns and British silver Crown patterns and die trials by Lauer for Queen Victoria. These were from the Murdoch Collection and not listed in W&R or ESC.

This gold pattern by Lauer, pedigreed to the Murdoch collection in 1904, is not listed in any reference book and was auctioned by Sotheby's in 1904, lot #541. This lot also included an 1887 pattern Farthing in gold. There were seven sessions of the sale of Murdoch's collection, featuring unique gold and silver British patterns and die trials which even one hundred years later is regarded as one of the most famous British coin collections ever assembled and sold.

NGC authenticated and certified this gold pattern as Medal PR 63 Cameo, since the exact denomination is unknown. The insert documents that it is designed by Lauer and is from the world famous Murdoch Collection of 1904. This unique gold pattern belongs in a world-class collection of British gold coins, or pattern and die trials or in a collection of unique numismatic rarities. This coin stands alone as a unique part of the history of Great Britain's coinage during the reign of Queen Victoria from 1837 to 1901. 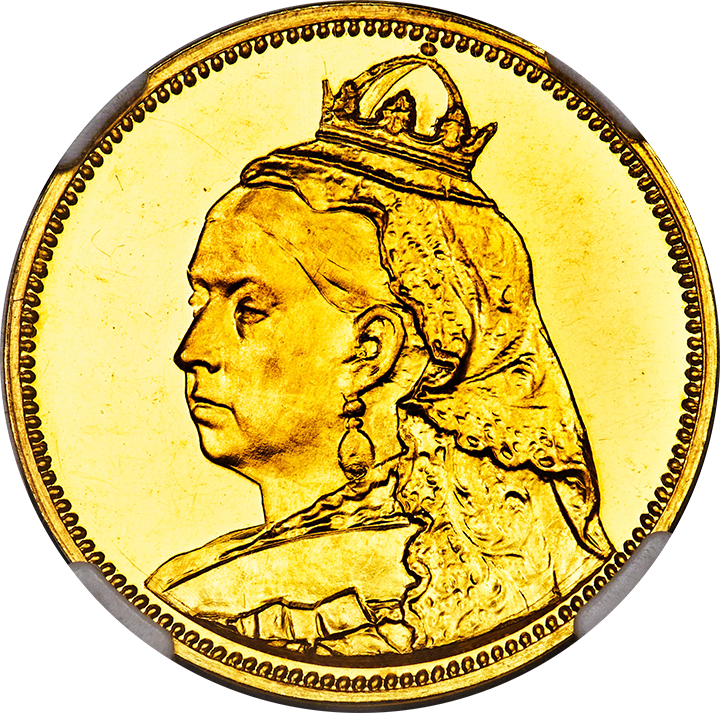 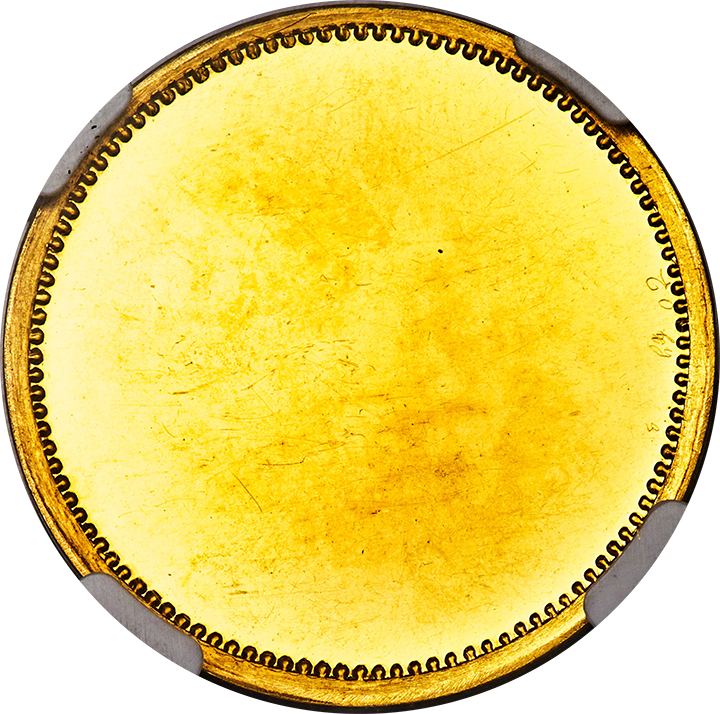 Featured on the cover of Mint Error News Magazine Issue 50: 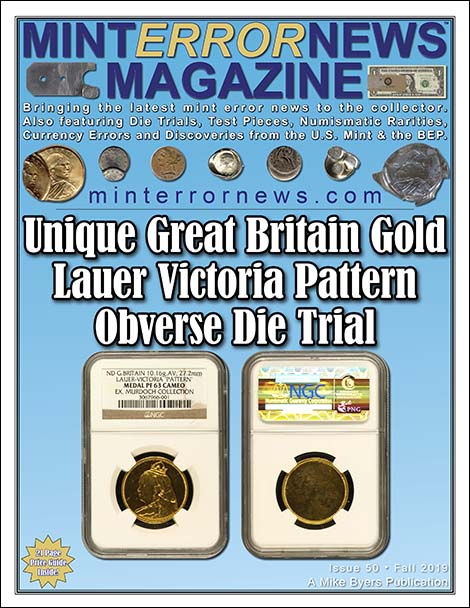 This unique pattern in gold was featured
in the John G. Murdoch Collection that was
sold by Sotheby, Wilkinson & Hodge in 1903-04.

Sotheby's calls the Murdoch Collection:
"the most important, valuable and
extensive ever formed in England."