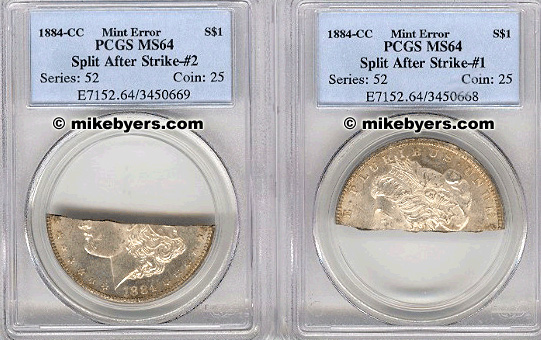 This is a very famous and unique major mint error. There are only a handful of U.S. coins that were split after strike. It is exciting that this occurred on this Carson City Morgan Dollar.

This rare type of error occurs when the planchet is not properly produced and includes impurities in the alloy. The stress of the strike causes the planchet to break and split in half horizontally through the center of the coin. There are only a few known U.S. silver and nickel coins that were broken after being struck. Research indicates that the following broken planchet mint errors have been identified: (1) Lincoln cent, (2) Buffalo nickels, (1) Liberty nickel, (2) Jefferson nickels, (2) Standing Liberty quarters, and (4) Morgan Silver Dollars. A few U.S. Patterns struck in glass and plastic also exist but have been net-graded and are not mint errors.

This Morgan Dollar broken after being struck is one of the most spectacular Silver Dollar mint errors known. It is a 1884-CC authenticated and certified by PCGS MS 64 as Split After Strike (Broken Planchet) and is encapsulated in two separate holders. It was featured in my NLG Award winning book, World's Greatest Mint Errors, in Chapter 24: Spectacular Errors (page 173). It is unique and valued at $50,000.