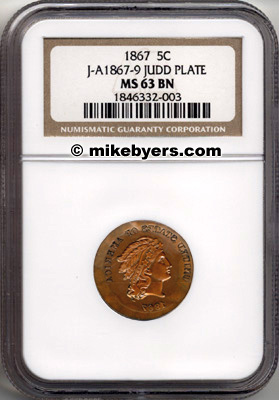 This unique obverse and reverse hub trial shows the incomplete design of the Liberty Head intended for the 5 Cent pattern in nickel and copper. The patterns were struck with a plain edge (Judd 566 & 567, Pollock 627 & 568).

In 1867 the U.S. Mint had considerable interest in exploring a uniform design for the Cent, the 3-Cent piece and the nickel 5-Cent piece. In response, Mint Engraver James B. Longacre designed and had struck several trial coins, known as patterns. These were 5-Cent patterns based on the Liberty head obverse design that was already in use on the 3-Cent Nickel. The finished 1867 Liberty head patterns featured the head of Miss Liberty wearing a coronet that had an outer beaded border and was inscribed with the word LIBERTY. Longacre also added a star to the coronet on some of the patterns.

This unique obverse and reverse hub trial is a significant part of numismatic history. This piece was struck in copper because that was the composition available at the Mint for this purpose. The punches used to make hub trial pieces were intended to be used to make working dies, with the result that the design elements that appeared on a hub trial were both incused and reversed. Hence the legend, the date and the Liberty Head all appear "backwards" and "indented" on this piece as compared with the finished die-struck pattern.

On this piece there is a circular scribe line around the outside of the letters of the legend to serve as a guide for the positioning of the hand-punched letters. Close inspection reveals that this piece had also been used previously. The reverse was used to test punches for "5" and for "CENTS". The obverse was also previously used and shows an earlier "1866" date punch, most easily seen by finding the reversed and incused "66" behind and slightly above Miss Liberty's ear. This specific hub trial is listed as Pollock-3329, and is pedigreed back to Lohr.

A comparison of this hub trial with the patterns that were finally struck shows differences in Liberty's coronet. On this piece the coronet has neither the beaded outer border nor the word LIBERTY, both of which are found on all known patterns, and it also lacks the star found on some of the pattern pieces.

This obverse and reverse hub trial gives us a glimpse into Longacre's creative process by illustrating a design that he made, and then personally changed before he arrived at his final product. 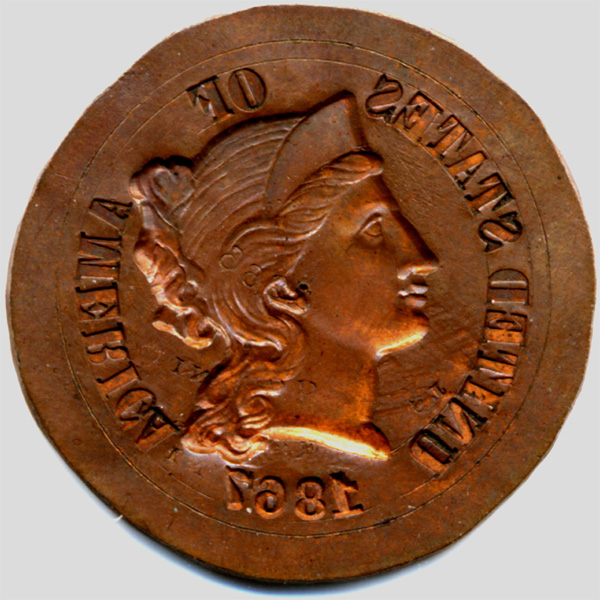 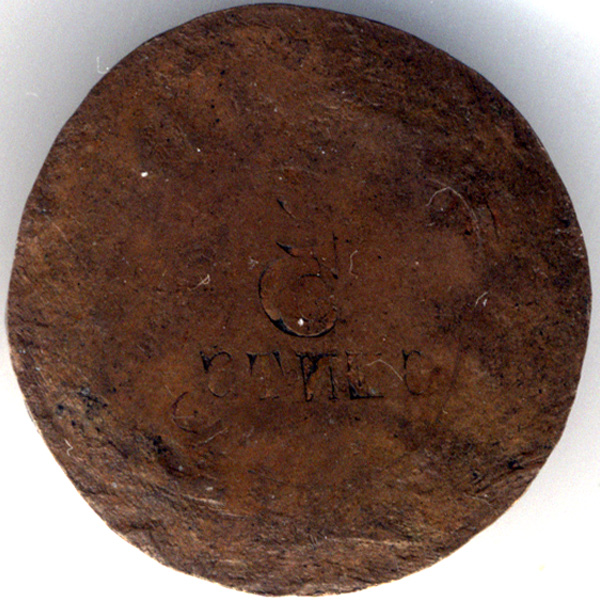