The Bechtlers were the first large-scale Private Gold Coiners before the Charlotte Mint was established in 1838. They also struck the first gold dollars- 18 years prior to the United States' Mint.

Christopher and his son, Augustus, struck gold $1's, $2 1/2's and $5's. The weight and fineness was stamped on each gold specimen.

There was an acute shortage of circulating gold coins in the South, which is one of the primary reasons why the Bechtler Mint flourished as coiners of Territorial Gold Pieces.

THIS IS THE ONLY KNOWN CERTIFIED U.S. TERRITORIAL GOLD MAJOR MINT ERROR from the Bechtler Mint, a private U.S. Territorial Mint that struck gold coins.

This UNIQUE U.S. TERRITORIAL GOLD ERROR was struck on a DOUBLE CLIPPED PLANCHET!!

Doug Winter, numismatic author, scholar, and expert on rare United States gold coins stated that "in over two decades of specializing in U.S. gold coins I've never seen an error on a Territorial gold coin. This is a major find!"

All U.S. major gold errors are extremely rare. THIS IS A DISCOVERY PIECE and belongs in the finest collection of Major Mint Errors, or in a United States gold coin collection. 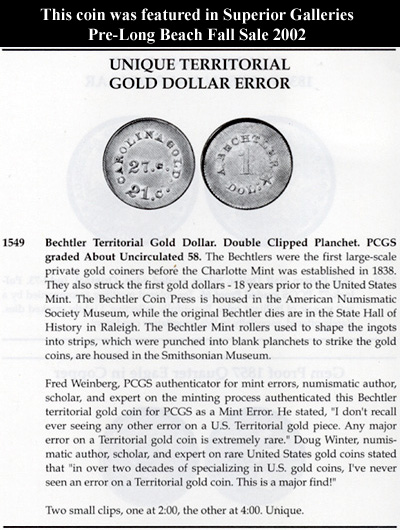