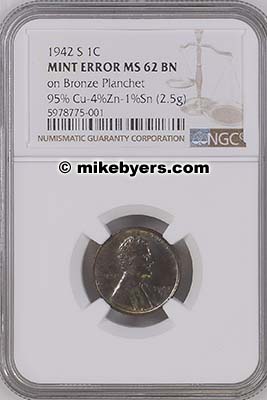 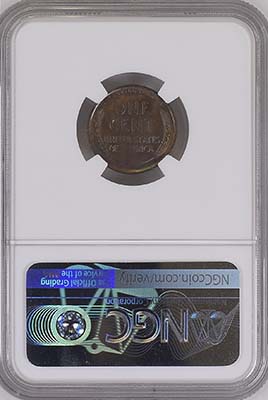 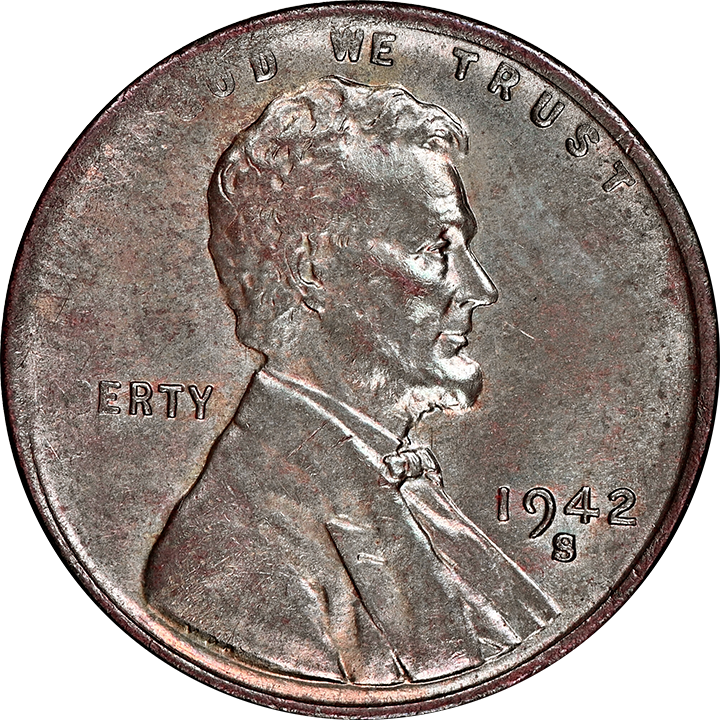 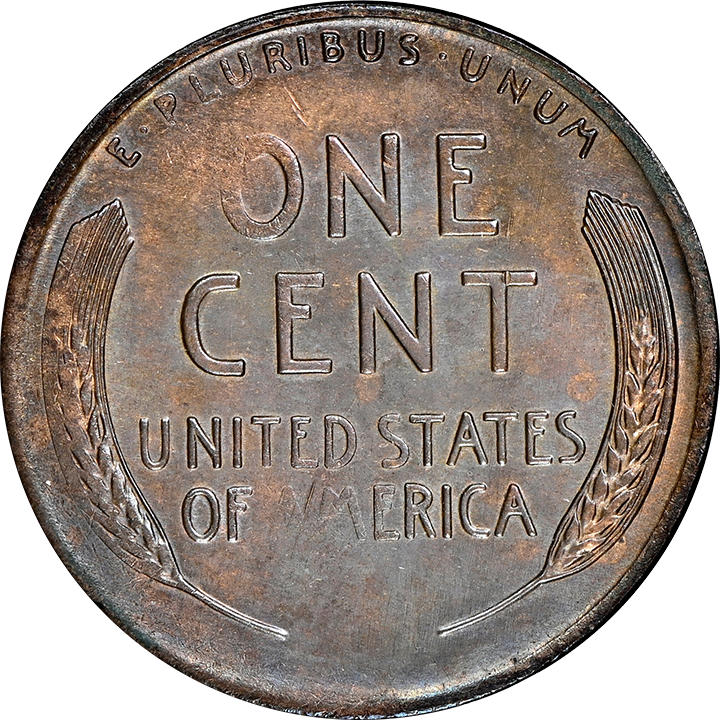 This is a fascinating 1942-S Lincoln Cent that was struck on a 2.5 gram bronze planchet with a composition of 95% copper, 4% zinc and 1% tin. After examining this unique mint error and consulting with many experts on mint errors, patterns and die trials, the consensus is that it was struck on a 1942 Curacao cent planchet that had been coated or plated with zinc before being struck.

This lovely original lustrous mint error is choice uncirculated. There is slight weakness in the strike which is visible on the obverse in the beginning of LIBERTY and part of IN GOD, and on the reverse in the O of ONE and the AM of AMERICA. This is due to the planchet weighing 2.5 grams and not 3.11 grams which affects the strike since the die pressure was set up for planchets weighing 3.11 grams.

Planchets for the 1942 Curacao cent were produced by the U.S. Mint in Philadelphia and have the exact same specifications as this 1942-S cent; 2.5 grams in weight, a diameter of 19mm and a composition of 95% copper, 4% zinc and 1% tin. However, Curacao cents were never struck in San Francisco!

The Mint Error News website has a 69 page report of coins struck by the U.S. Mint for foreign countries. It is the most comprehensive report available anywhere. Page 9 details the coins that were struck for Curacao including the 2.5 gram bronze cent planchet. Click here for a pdf of the 69 page report.

This unique new discovery has a partial zinc appearance on the obverse and reverse as well as a zinc band on the edge. 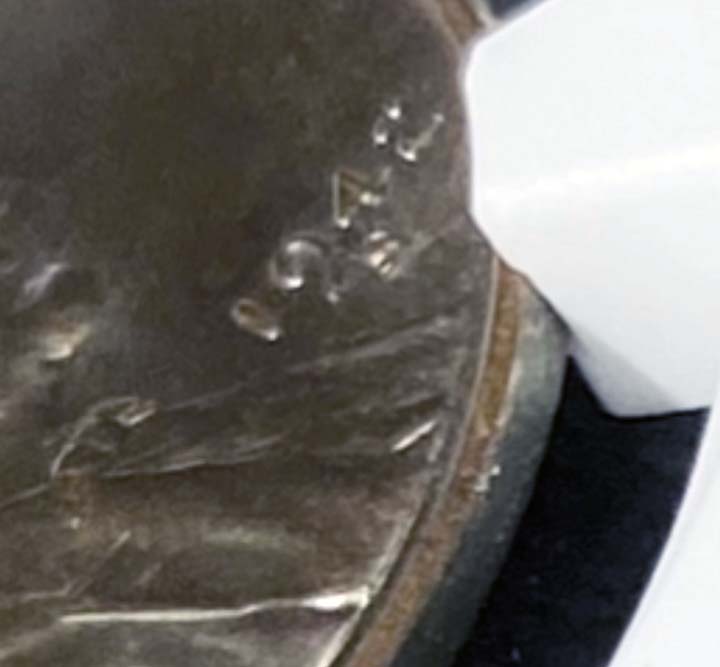 The U.S. Mint in Philadelphia experimented extensively with zinc and copper planchets during World War II. These experiments have been outlined in Roger Burdette's book United States Pattern & Experimental Pieces of WW-II. Test planchets in various compositions were produced, as well as many experimental surfaces such as plating and coating.

It is common procedure for pattern experts including NGC and Roger Burdette as well as the authors and researchers of the Judd reference book United States Pattern Coins, to classify coating and plating in their determination.


As amazing as it seems, it appears that this Curacao cent planchet was either coated or plated with zinc in the experiments during the transition of U.S. cents from bronze planchets to zinc-coated steel planchets.

If the planchet was intentionally plated or coated with zinc as part of the experiments then this would be classified as a test piece. If the planchet was accidentally mixed with U.S. cent planchets that were being experimented on, then it is a mint error. Subsequently, it somehow was transferred to the San Francisco Mint and struck by U.S. cent dies in 1942.


Although there is no absolute proof that this is exactly what occurred, nor is there any documentation, the most logical explanation to describe the chain of events of this unique 1942-S cent is intriguing and enigmatic. A Philadelphia Mint produced Curacao planchet was likely coated or plated when Philadelphia experimented with copper and zinc planchets and was subsequently struck in San Francisco by U.S. Cent dies.

For comparison and to provide similar information relative to 1942 U.S. Lincoln cents that were patterns, test pieces or mint errors, here are two excellent examples:

I recently handled the unique 1942 Philadelphia Mint Lincoln cent struck on an aluminum planchet in proof. Clearly it was a pattern and test piece experimenting with a different composition and alternative to producing copper cents in 1943, due to the copper shortage during World War II. This unique aluminum cent has traded several times, once at $300,000.

This unique 1942-S cent, most likely struck on a 1942 Curacao cent planchet from the Philadelphia Mint, coated or plated with zinc and then struck in San Francisco by U.S. cent dies, will remain an enigmatic discovery. It belongs in a world-class collection of Lincoln cents, major mint errors or unique numismatic rarities.

Featured on the cover of Mint Error News Magazine Issue 62: 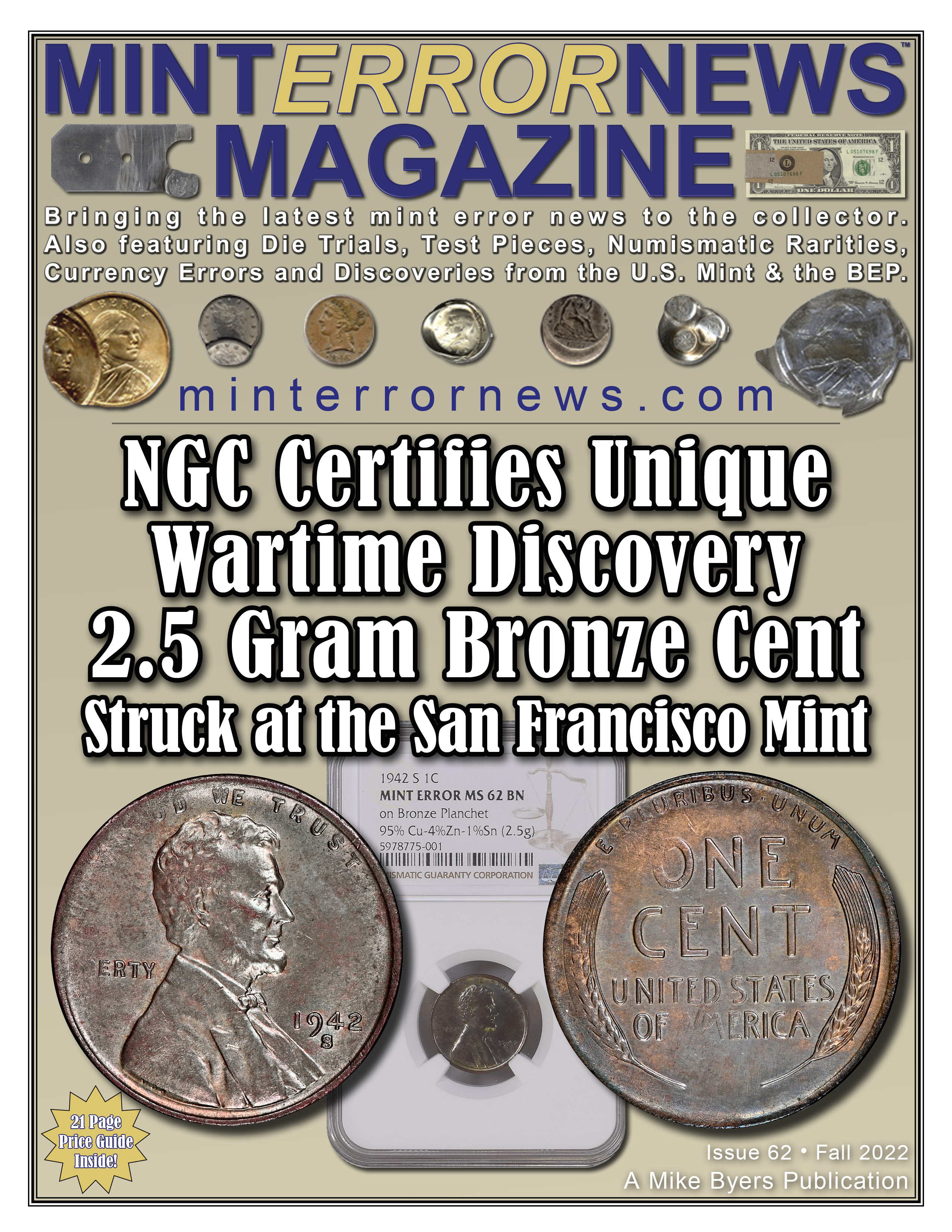 
Click here for a pdf of the 69 page report.