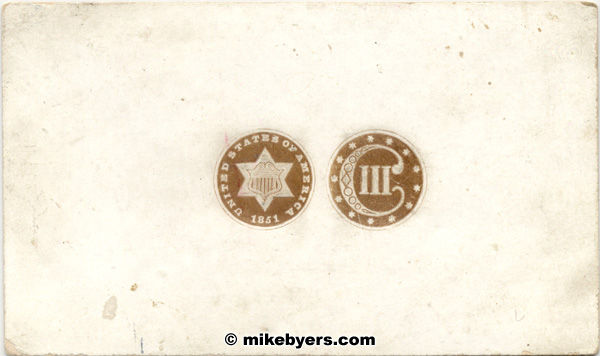 This is a spectacular 1851 3¢ Obverse and Reverse Die Trial struck on cardboard.

This glaze-surfaced card is .35mm thick and measures 85mm wide by 50mm tall. It is clearly embossed with lettering and design elements raised. After the dies struck the cardboard, a bronze-gold ink was applied to show the high relief.

This die trial is featured in the Judd 9th Edition of United States Pattern Coins on page 296 as the Plate Coin JA1851-1. There are two known examples, one in the Library Company of Philadelphia collection that includes a March 24, 1851 letter from James Longacre to the Secretary of the Treasury stating that "It is the first impression I have taken from the dies I have been preparing for the three cent piece ordered by congress."

This example includes an August 17, 1857 letter from George F. Nesbitt, who was contracted to supply imprinted postal stationery to the Post Office Department from 1853 until 1870. He was searching for a die that could be used to emboss postal stationery. Longacre, who designed the three cent piece, supplied him with this 3¢ Obverse & Reverse Die Trial that had been produced in 1851. Nesbitt's letter to Third Assistant Postmaster General: 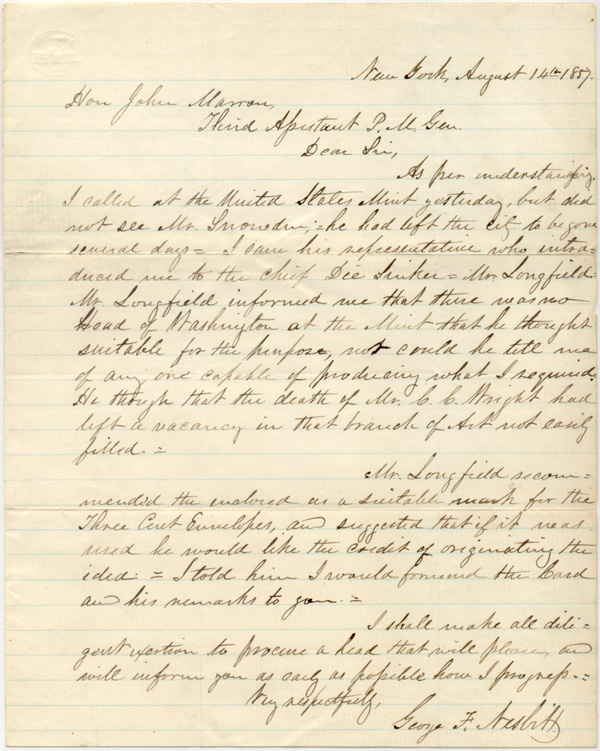 This same act of March 3, 1851 also authorized the first issuance of a three cent coin. This is the first instance of a coin being issued directly to aid in the payment of a postal rate in the United States.

The three cent envelopes issued in 1853 were the first postal stationery of the United States. 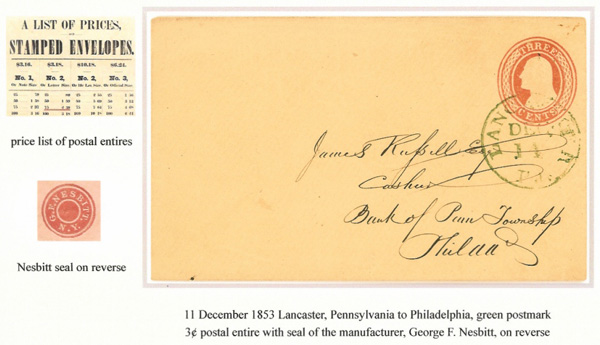 These were manufactured by George Nesbitt & co. and he placed his embossed seal on the reverse until ordered to discontinue the practice on July 7, 1853. These were intended to be purchased in bulk by business users at a slight advance over the imprint stamp value. A quantity of 75 of these would have cost the purchaser $2.39.

Very few patterns and die trials illustrated in the Judd book include pedigree dating back to when they were originally struck.

Special thanks go to Richard Frajola of rfrajola.com & Saul Teichman of uspatterns.com
for their research and assistance in documenting the history of this spectacular 3¢ die trial.
Coin Inventory  |  Archives  |  About  |  Contact
Terms  |  News  |  Glossary  |  Calendar  |  Home