There are approximately thirty genuine two-headed or two-tailed coins that have been authenticated by ANACS, PCGS or NGC. There are only four known "Two Tailed" U.S. coins: three Quarters and one Dime. One of the Quarters recently sold for $80,000.

Great Britain changed to the decimal coinage in 1971, which was the first year that they stuck the new ½ Pence KM-914. Recently, these three unique and exotic mint errors were discovered in an estate of a Mint Superintendant. All three of these coins were struck from the dies used for this new decimal ½ Pence in 1971. These were certified by NGC and are now being offered for sale. One was struck from two reverse dies, another struck from two obverse dies and the third is an unbelievable coin struck by two obverse dies in a different metal. Hopefully these three unique and historic mint errors will remain intact since they belong together.

The coin below is a Great Britain ½ Pence. It was struck with two obverse dies. Instead of being struck in bronze, it is on a Copper Nickel blank planchet. To date, this is the only known "Two Headed" or "Two Tailed" mint error that is also an off-metal. It is an exciting discovery since this a unique combination. This occurred when mismatched dies were selected to strike ½ Pence coins and a wrong planchet inadvertently remained in the collar. Unique. 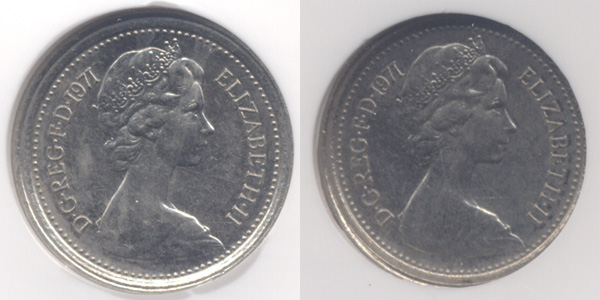 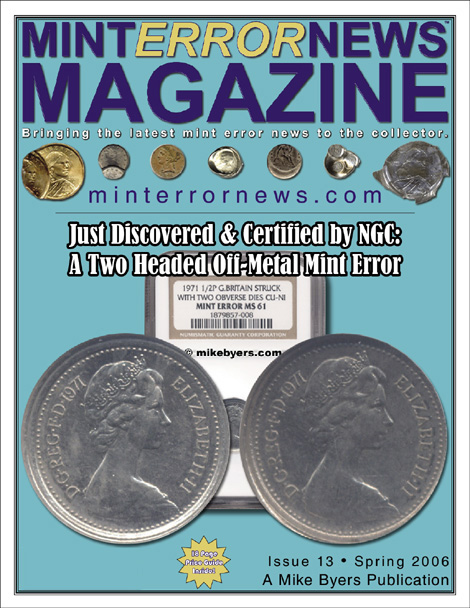