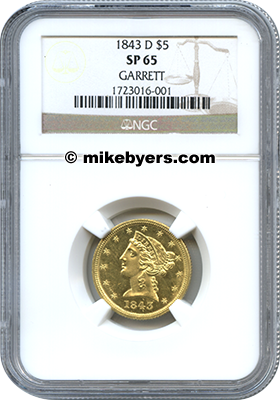 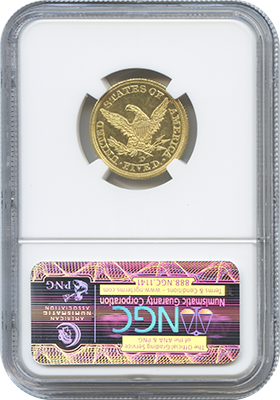 This 1843 half eagle was struck at the Dahlonega Mint and is the only known or certified specimen or proof Dahlonega gold piece of any denomination. This coin is graded an impressive Specimen 65 by NGC, which is a rare designation by both NGC and PCGS.

This half eagle is listed in the Encyclopedia of U.S. Gold Coins 1795-1933 by Jeff Garrett and Ron Guth. Here is the description from page 288:

One extraordinary example of the 1843-D half eagle is known that has been certified by NGC as Specimen. The coin is deeply mirrored, and extremely well struck. The coin was probably a presentation striking of some sort. The occasion for the issue is unknown. The quality of the piece is exceptional as well, and the coin currently has been assigned a Specimen-65 rating. Branch-mint Proof and specimen issues are always interesting, and this coin certainly does not disappoint.

John Garrett purchased this specimen from the Haseltine's 69th sale in January 1884. It was considered a proof for nearly 100 years. Garrett's collection was sold by Stack's in March 1976, including this 1843 half eagle (lot 375), and is considered the greatest coin collection of all time. In this sale, the cataloger gave the opinion that it was stuck as a proof. When Garrett purchased this remarkable coin, there had never been rumors of a known specimen or proof from the Dahlonega Branch Mint in Georgia. This specimen was not only preserved during Garrett's lifetime in his collection but also at John's Hopkins University who inherited his coin collection.

This coin was initially authenticated and graded by PCGS as MS 64. The PCGS population report shows this MS 64 as the finest known. It sold in the Harry Bass Jr collection in October 1999 (lot 923). Subsequently, this piece has now been authenticated and graded as Specimen 65 by NGC. The NGC population report shows one MS 64 and nothing higher. The MS 64 from NGC is pedigreed to the Duke collection which is the all-time finest collection from a standpoint of quality and rarity and even the Duke collection just had a MS 64. This unique half eagle is listed in the proof section of the NGC Coin Explorer as a Specimen.

All Branch Mint gold coins of proof or specimen status are of the highest rarity of United States coins. In the early nineteenth century, the discovery of gold in the southeastern United States led to the Congressional Act of March 3, 1835 establishing United States Branch Mints at Dahlonega, Georgia and Charlotte, North Carolina. The gold coins from these Branch Mints are among the most avidly collected in all of American numismatics. The Dahlonega Mint utilized state-of-the-art steam-driven presses of the same design that was first used in 1836 at the Philadelphia Mint. Only gold coins were struck with denominations including half eagles ($5), three dollar pieces, quarter eagles ($2.50), and one dollar pieces. The Dahlonega Mint operated for 24 calendar years and produced relatively low mintages. Half eagles were struck for each year of operation with a total mintage of 1,109,258 coins. In addition to the low mintages, Dahlonega coins are scarce and some are rare. During this first gold rush, the Dahlonega Mint was hurriedly constructed in a remote location and suffered numerous production and minting problems. Many coins were struck on imperfect planchets or were weakly struck. Few are known in mint state condition.

The majority of 1843-D Half Eagles are very heavily abraded with distracting marks in the fields. Often they come somewhat weakly struck as well. The devices on this specimen show deep frost on all central devices as well as the date, stars, lettering and mint mark. This cameo look is contrasted by fully reflected mirror-like fields. Slight copper-gold toning is noticed around the rims adding to the originality of this coin. The coin exhibits virtually a full proof surface and an extreme sharp strike with square borders and edges. In choice uncirculated condition or better, the 1843 Dahlonega gold piece is rare with only ten or so certified. Considering the primitive and rustic conditions in the 1840's at the Dahlonega Mint this Specimen $5 is a gem preserved unique rarity. 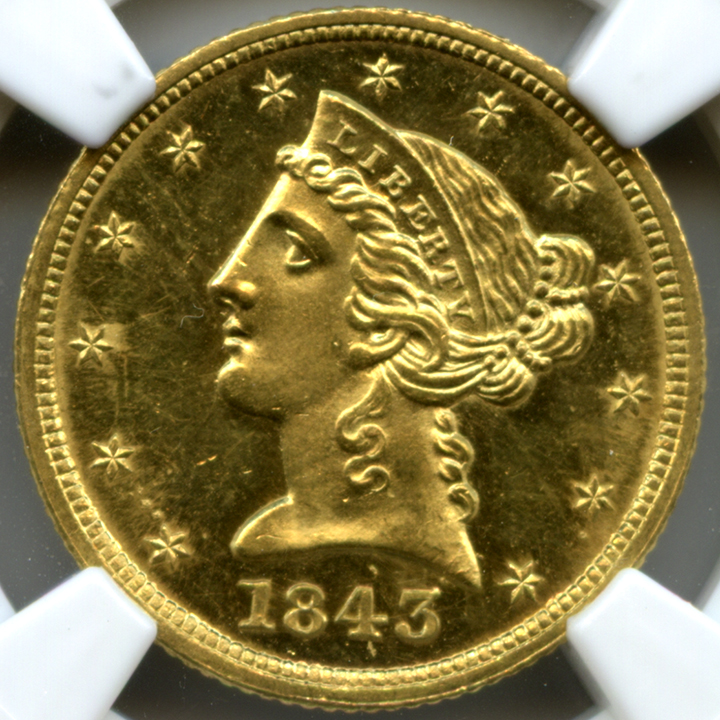 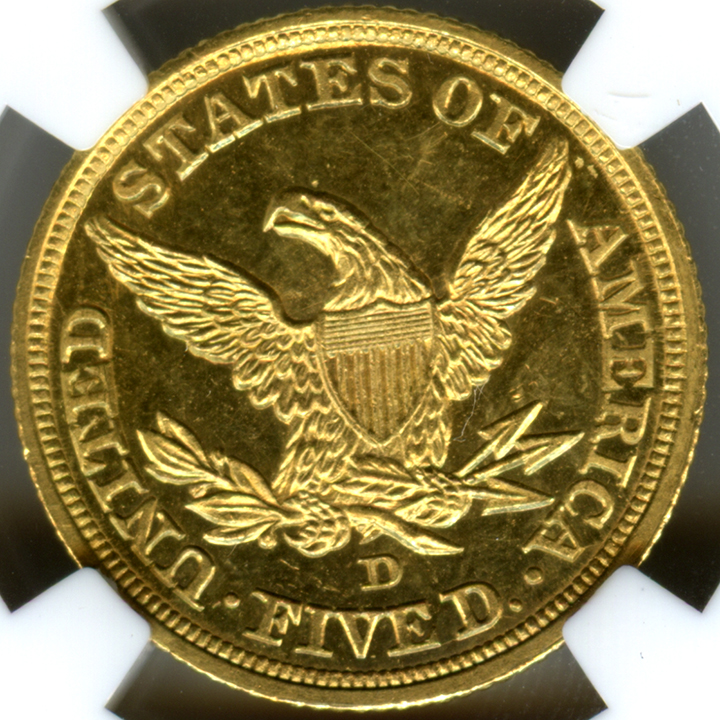