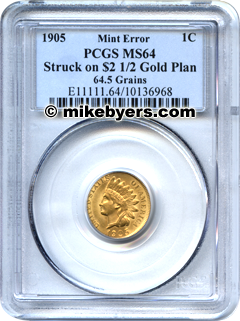 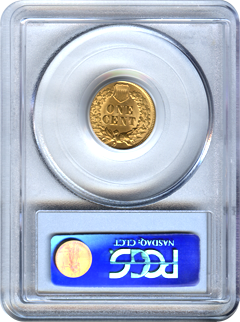 There are five Indian cents known that are stuck on gold planchets. Among them are three dated 1900, this piece dated 1905, and an example dated 1906. The Judd pattern reference lists 1900 and 1907 gold cents in the section on mint errors. However, Andrew W. Pollock, III, listed the 1900 gold Indian cents as P-1990 in the regular pattern section of his reference. Pollock writes: "Listed in Judd as a mint error, but it is difficult to imagine that a Mint employee would be so careless as to feed gold planchets into a coinage press fitted with one-cent piece dies." Pollock suggests that these pieces may have been deliberately struck for one or more collectors.

1900. Michael Hodder reported in a May 14, 1996 letter to Q. David Bowers that he had personally seen three different pieces, all with weights in the range of 65.8 to 67.1 grains. See Bowers' A Buyer's and Enthusiast's Guide to Flying Eagle and Indian Cents, p. 427.

1905 MS64 PCGS. Apparently unknown to the numismatic community prior to the current offering. Weight: 64.5 grains, the standard weight for a quarter eagle planchet.

1907. Listed in the Judd pattern book, and in Donald Taxay's Catalogue and Encyclopedia [of] U.S. Coins. The 1907 gold Indian cent is currently unlocated.

There is one example dated 1900 that was stuck in silver, from the identical dies as the 1900 gold Indian cents, suggesting they were all made at or near the same time.

This example has brilliant yellow surfaces with frosty mint luster. A few faint hairlines on the cheek prevent a Gem grade assignment. This stunning gold Indian cent is one of the truly amazing error coins of all time and is unique for the date. 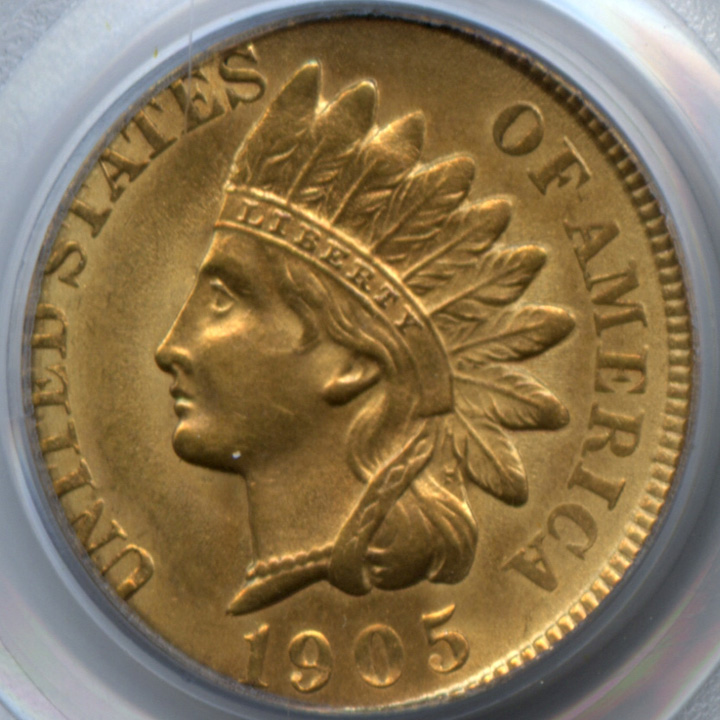