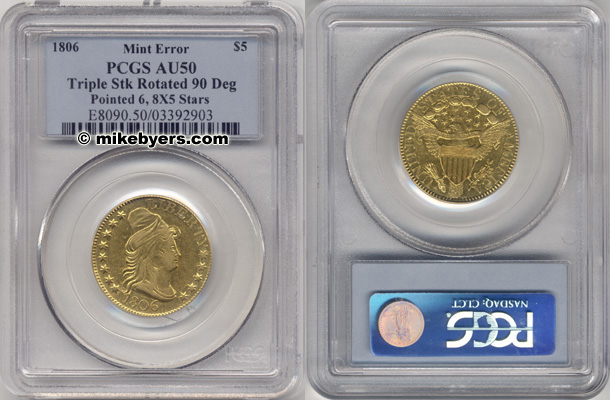 John Dannreuther is one of the founders and owners of PCGS. He is a well known professional numismatist, scholar, researcher, world class grader and has authored and co-authored many research books on coins. This 1806 $5 Capped Bust to Right, Heraldic Eagle, Pointed 6, 8X5 Stars Gold Piece was actually struck four times. John Dannreuther's research and scans clearly illustrate the four strikes as this coin was struck off-center, rotated and then centered. With only six to ten pieces known of this rare die variety and considering that it is also struck four times, this discovery coin is a significant numismatic rarity. The following are his comments on the research he conducted regarding this discovery coin.

This is one of the rarest early gold varieties with an estimate of 6 to 10 known in my new book on early gold (covering the 205 known varieties of the three denominations from 1795 to the 1834 Motto coinage). This example is the earliest die state encountered and this fabulous error coin may explain the rarity of this early half eagle variety (Bass-Dannreuther 3, Miller 80, Breen unlisted). Both dies failed early with this variety, this unique obverse and reverse die pair's only use. This is unusual in the early half eagle series, as dies were used until they failed, sometimes paired with multiple dies to create several varieties. The BD-3 variety quickly developed the die crack that traverses from the edge through the top of the cap, meanders down through the head, and ends at the edge below the right side of the 0 of the date. On this error example only part of this eventually bisecting crack has developed, while neither the field break behind the head nor the crack from Star 6 through 8 to the rim have appeared. Thus, there seems to be a good explanation for the absence of these cracks on this coin.

It appears that this coin may have caused the cracks by stressing the dies! This coin first was struck in normal alignment about 10-15% off center. After this first strike it was rotated about 90 degrees and struck properly centered between the dies. It then appears to have been slightly rotated again and struck a third time. The fourth and final blow was in proper alignment, as well as centered, and results in an almost normal looking coin - at least at first glance.

Closer examination reveals the date at 9:00 on the obverse (second, and possibly a third, strike) 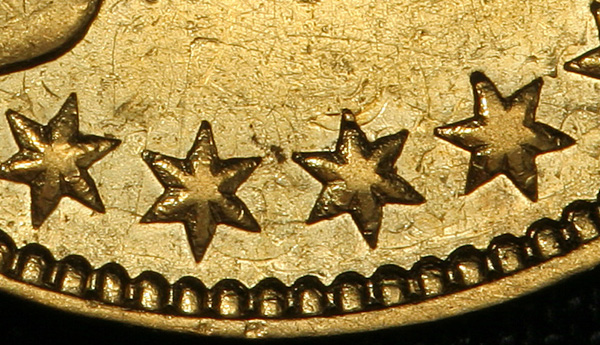 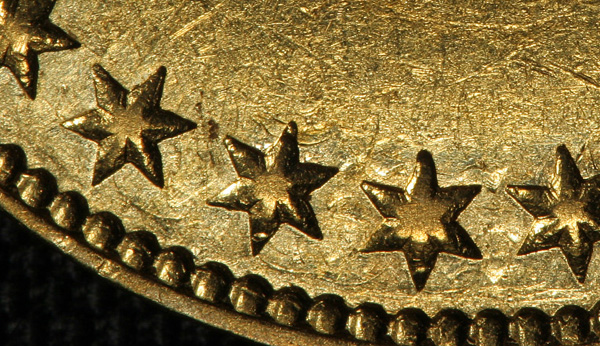 The first strike was off center so only a few left stars, but quite a few dentils 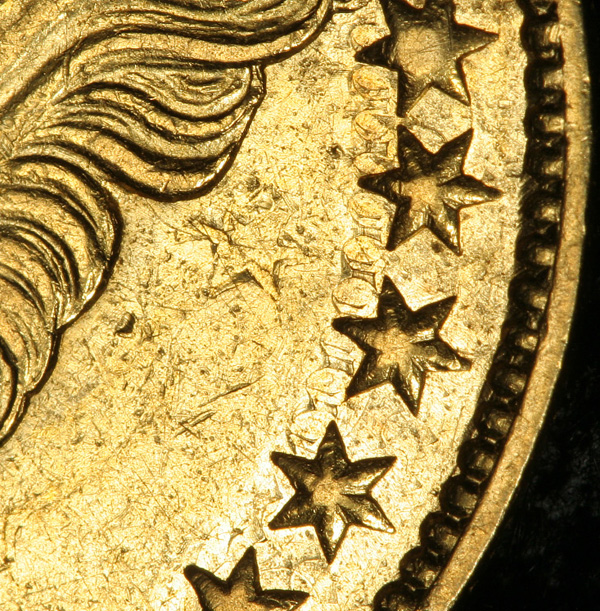 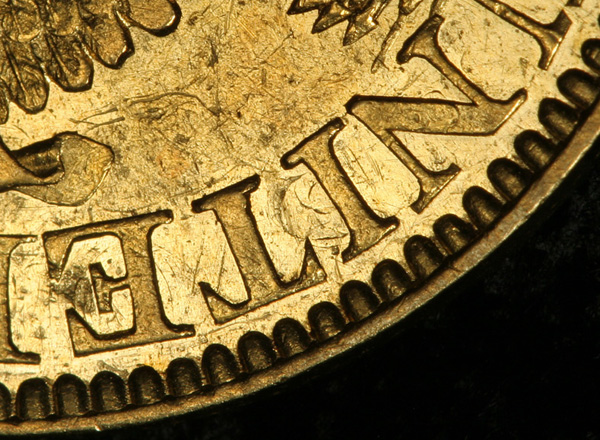 The obverse die was in the lower position for this variety (this changed with the introduction of the 1806 Knobbed 6 half eagle later that year), so I believe the obverse and reverse dies of this coin were damaged with this striking, especially the obverse, which took a more severe blow. As noted, all examples of this very rare 1806 Pointed 6 (BD-3) variety seen until this point had the field break left of the head and the crack from S6-S8, so this coin is the likely culprit: Sherlock Holmes would arrest this coin!

It is the coin that "cracked" the dies. To find such an unusual coin of such a rare die variety is unusual, indeed!

Here is the excerpt from John Dannreuther's new book on this rare variety: 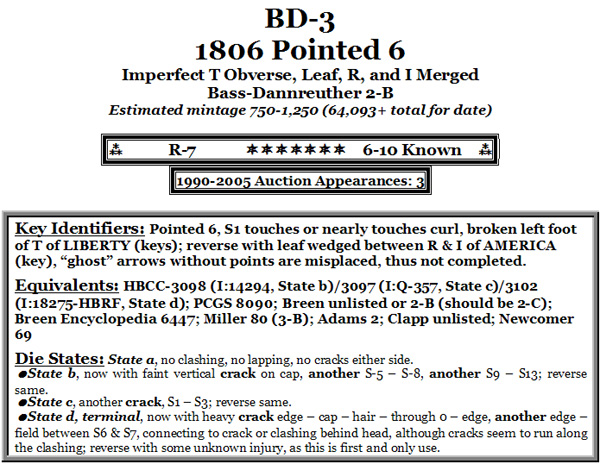 The core collection retained all three varieties of this very rare variety, each in different states of the dies. As Mr. Bass noted, this is the only 1806 obverse die that used the T without its left foot. Thus, undoubtedly this was the last obverse die created before the letter punch set was replaced with the slightly smaller size one used for the Knobbed 6 variety (BD-6). It is uncertain where this variety belongs in the emission sequence, but it has been placed here in deference to Edgar Adams who listed it as his variety 2. This coin may belong elsewhere, possibly even after BD-6, the available Knobbed 6 variety.

Miller thought this variety was unique, but Harry Bass owned three examples! There are likely only a few other examples of this super rarity out there, as Breen did not even list this variety in his monograph on half eagles! However, Adams and Newcomer both recorded this very rare die variety. Adams noted: "Die crack through '0'; Leaf of olive branch and bases of 'R' and 'I' united." One can see that no other 1806 variety fits these criteria, save this one.

Harry Bass rediscovered this variety in 1970 when he bought the Gaston DiBello coin in the Stack's sale of that collection. This coin earlier appeared in S.H. Chapman's Wilson sale in 1907, likely the example noted by Adams and possibly the Newcomer specimen.

Another example appeared in the Bowers and Merena 12/2003 auction as Lot 2548, although no variety was noted in the catalog.

Since this was the only use of the obverse and reverse, we can surmise that the reverse suffered some injury like the obverse displays on HBCC-3102. 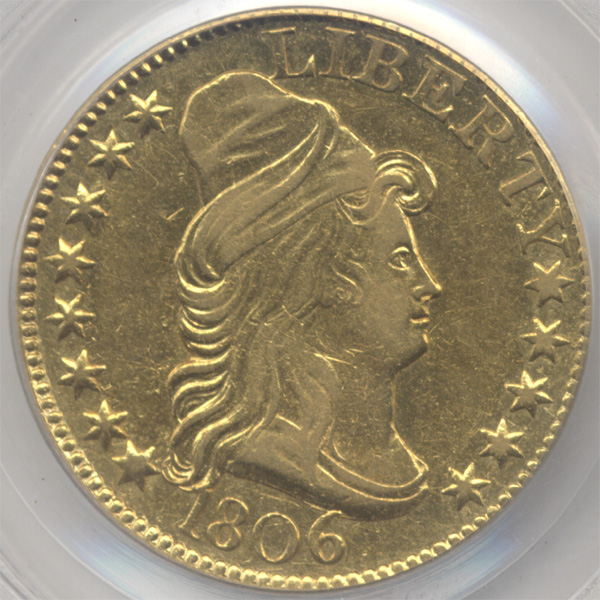 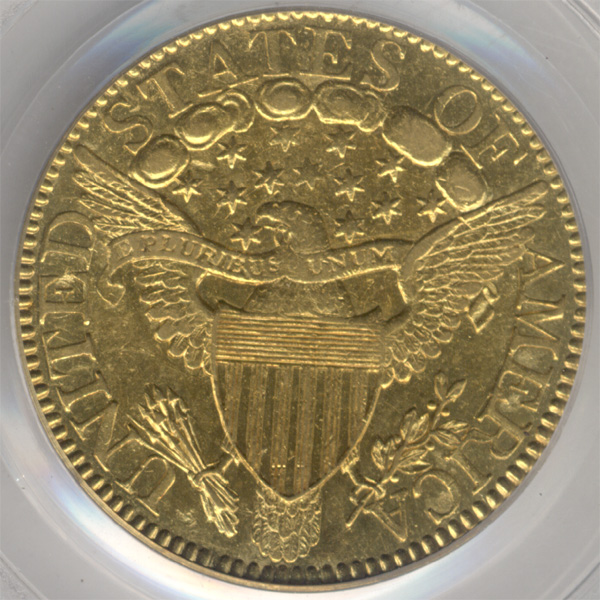 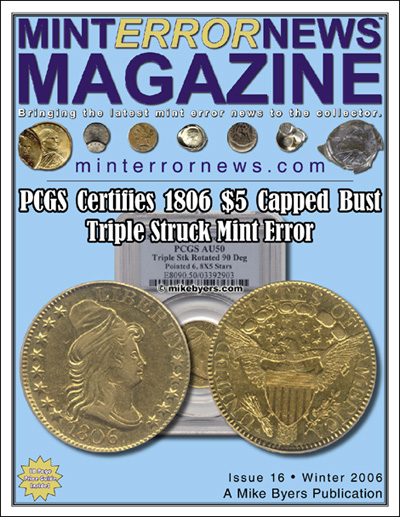