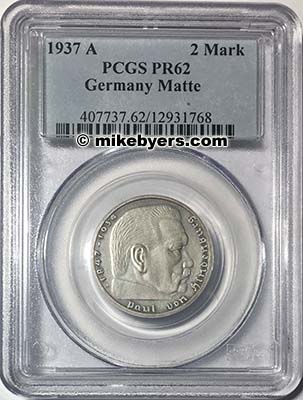 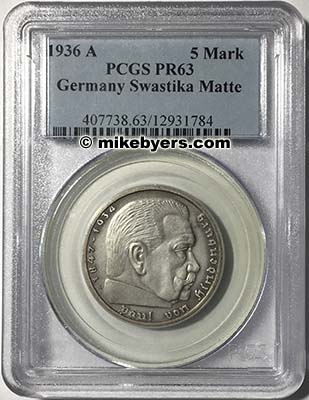 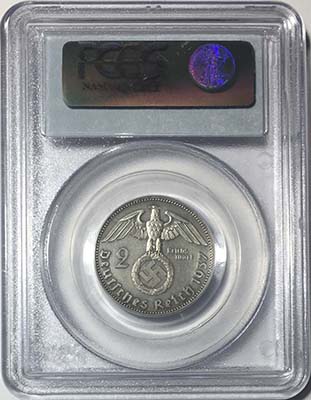 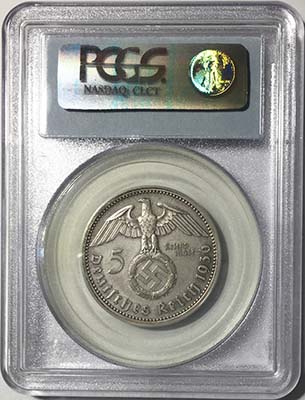 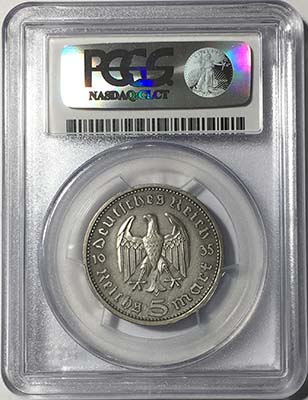 
"There was a debate about adding the German Third Reich category to the PCGS Set Registry®. The German Third Reich is responsible for the Holocaust, the murder of six million Jews in Europe. It left a permanent stain on human history. In the end, it was decided that World War II was such an important era, despite the horrifying racially motivated atrocities, the coinage of that period should not be ignored. Coins from the Third Reich should be a reminder of the lives that were lost."

"The German Third Reich category has proved to be very popular in the PCGS Set Registry. In fact, there are more registered sets for Third Reich coins than in any other German category. The proof type set composition is new and as PCGS grades more proofs, the category will be expanded to include denomination proof sets."

This is a unique historical and unbelievable set of all three Third Reich proof silver issues in matte proof of the Hindenburg German coins. It has been authenticated and certified by PCGS. These were officially struck by the Berlin Mint and specially produced in matte proof. It is amazing that this set survived World War II and was preserved for 8 decades.

The 1937A silver 2 Mark is unique in matte proof. It is unrecorded in all reference books and no others are known or rumored to exist. The obverse has the portrait of Hindenburg with the German Swastika reverse. It has original surfaces, light toning and is conservatively graded.

The 1936A silver 5 Mark is also unique in matte proof. It is also unrecorded in all reference books and no others are known or rumored to exist. The obverse also has the portrait of Hindenburg with the German Swastika reverse. It has original matched light toning and smooth matte surfaces.

The 1935A silver 5 Mark is one of only two known in matte proof. It matches the other two, with original surfaces and light toning. The obverse has the portrait of Hindenburg but the reverse portrays the Eagle, not the Swastika.

This unique 3 piece Hindenburg silver matte proof set is part of Germany's history and belongs in a German Museum or in a world class collection of German coins or unique numismatic rarities.

Many of Hitler's personal items and items relating to the Third Reich have sold in public auction for record amounts. A few examples are: 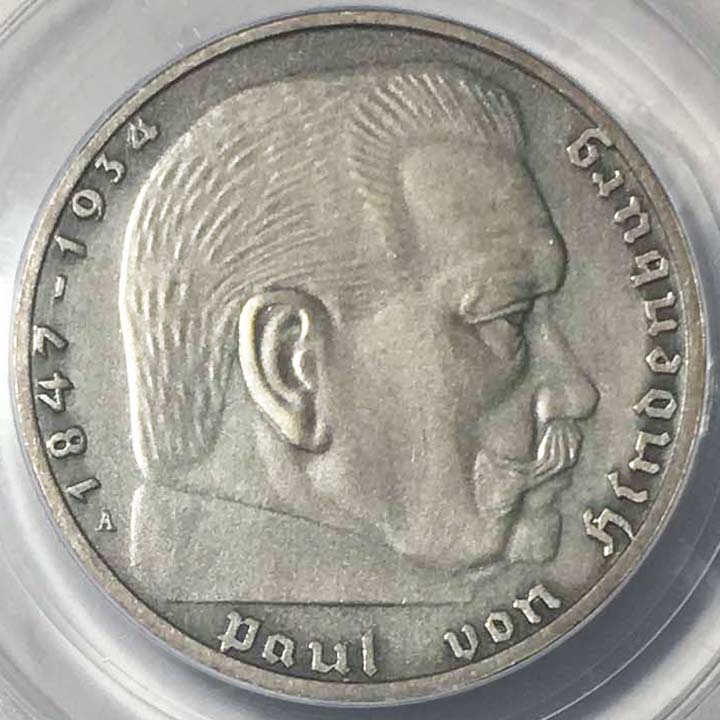 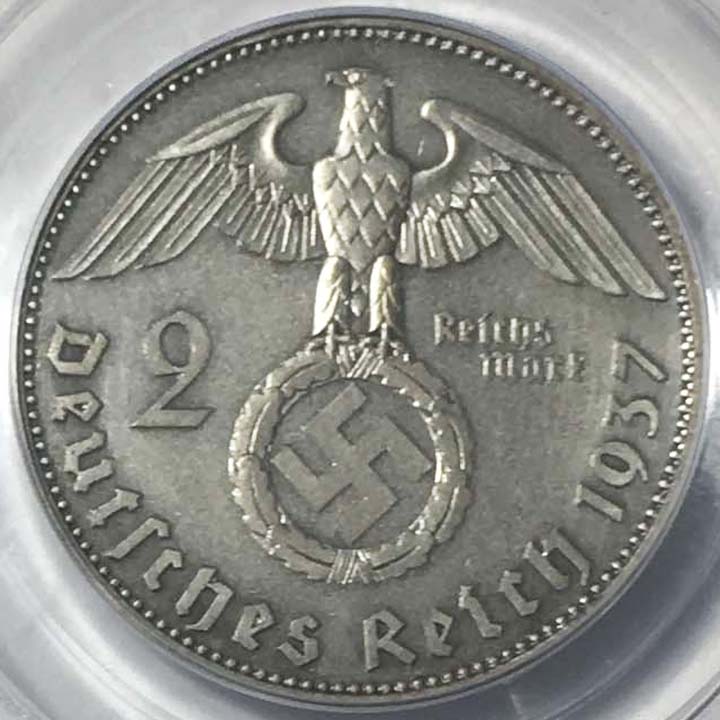 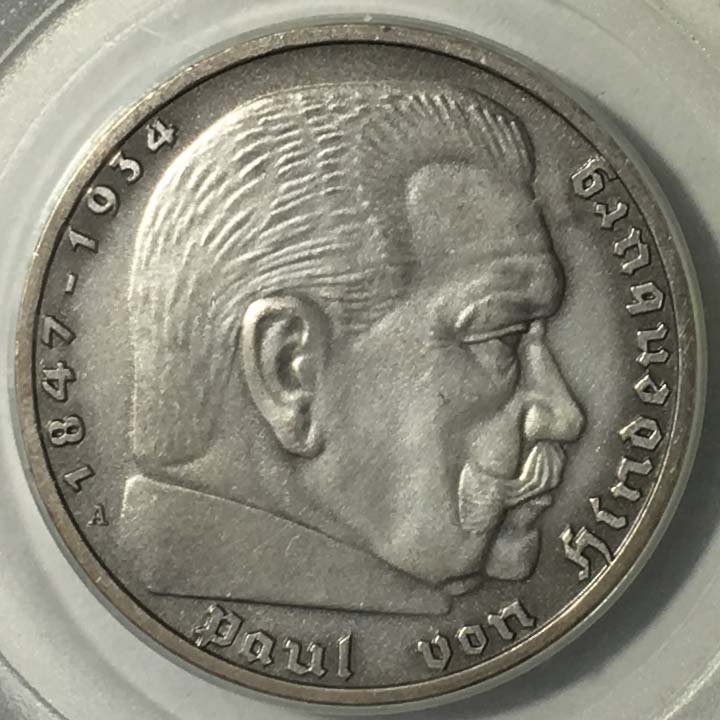 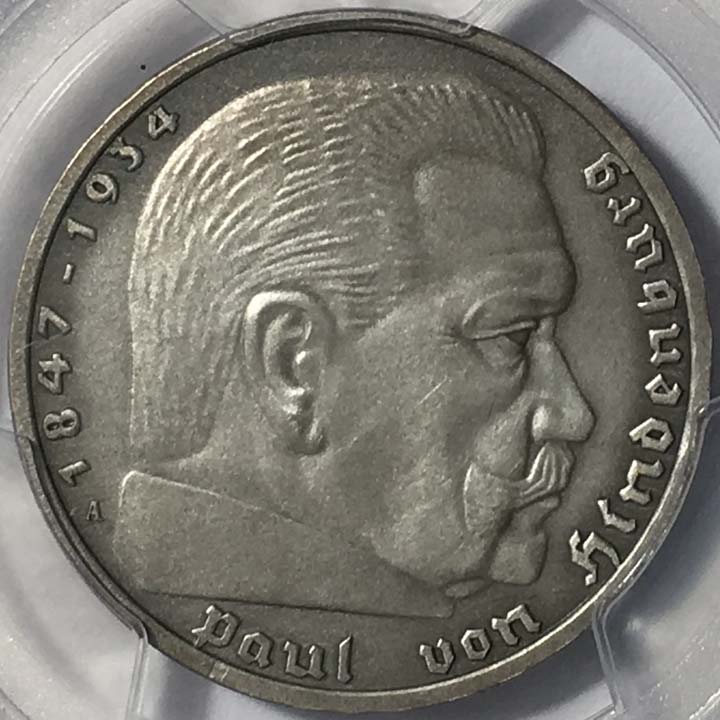